Bees and Wasps – Their Predators, Prey, and Relationship 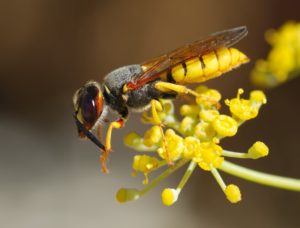 I’ve only gotten one bee sting in my life (thank god it was not a wasp sting) and hopefully it’s the last sting I receive. Stings make you resent the bees, wasps, and their stingers. Luckily for us, the bees and the wasps both have many natural enemies. Without these natural enemies we’d experience many more stings than we currently do. So what eats bees and what eats wasps?

Some of the following predators are known to break into the homes of these bees and hornets, ravage their hive and devour the workers, products, and even queen(s). Skunks, foxes, badgers, bears, and weasel are all a few of the predators that the wasps and bees share in common.They are the ones that bring destruction to a bees hard work in their hives.

Aside from those animals, there’s one big, stereotypical, predator to the hornets and bees – the black bear. You’ve seen it in movies, such as the Jungle Book, and popular shows such as Winnie the Pooh. Bears enjoy snacking on bees and wasps. To top it all off however, after their dinner they resort to honey as a delicate dessert.

There’s more to it than just that though, wasps and bees still have more to worry about! What eats wasps though – there’s more un-fearful predators to them and the bees? Of course. Three other main categories of hornet and bee vultures remain; the reptiles, birds, and other insects. Birds prefer to hunt their bees and wasps when they’re alone and not with friends (a smart choice if you 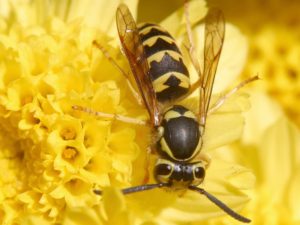 ask me). Each insect has their own technique on how to prey on these busy honey-craved workers. A spider will catch them with a web they’ve created, a praying mantis will tackle a lone bee down, and a robber fly will basically paralyze them.

Summary of Who the Predators to a Wasp and Bee are

Long story short, these are the mutual predators the wasp and bees share in common (but not limited to): spiders, praying mantises, birds, toads, salamanders, lizards, turtles, other reptiles, centipedes, birds, and dragon-flies.

Fun Fact: Though they share similar natural enemies, the wasp is also another enemy to the bee!

Bees are very hard working and, as a matter of fact, they spend the majority of their life working. What do bees work with you may ask? Honey! So if you’re curious as to what bees eat, the biggest answer is actually honey but that’s not all.

Bees also eat nectar and pollen. The larvae of a bee will eat royal jelly which is produced by the glands of mature adult bees and a mix of honey along with pollen.

With wasps it gets bit more complex to answer: “what does a wasp eat”. Wasps prey on more than a bee does and so the answer is longer but there’s no need to worry because we’ll keep it simple.

What a wasp will eat varies depending on the age and type of wasp. There are wasps that share the same diet as a bee and because of this they base a lot of their diet on nectar. For the wasps that don’t eat nectar, their are some that are purely carnivores and tend to eat off dead animal matter. For the majority of wasps though, they are omnivores and will enjoy animal and plant matter including fruits and fruit juice as well.

The larvae of a wasp is a different story. Some larvae are purely vegetarian and eat only animal matter until they grow older. Other larvae have a special relationship with adults and rely on the adults to bring prey to them. Once that is done, the larvae will regurgitate what they ate into a sweet substance that the adults will eat. Talk about a win-win.

With more than 200,000 species of wasps, I think it can be expected that numerous answers may apply to “where do wasps live?”. Overall, wasps live in almost every country and they live for a few months to a few years. With that in mind, let’s get into where a wasp may build it’s nest.

The home of a wasp is usually made in trees, bushes, or on homes. They also tend to make their nest in vacant ground holes/burrows. That is essentially where most wasps will live.