Lions – What They Eat and What Eats Them 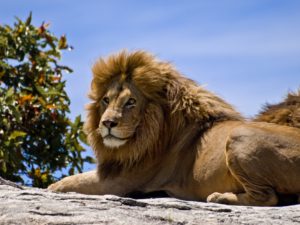 Another article on what eats a common predator to many animals (in other words, a common predator for an animal at the top of the food-chain). To answer the question “what consumes lion” isn’t very hard because it’s quite a simple list. Not many animals attempt to get near a lion let alone eat it. Being at the top of the food-web, lions don’t have many things to worry about but that doesn’t mean they’re resistant to being consumed.

A lion’s main threat are humans. Humans are the main threat to lions but luckily they’re protected by law. They also usually need to be extra aggressive for when they go against some of their prey. Crocodiles, antelopes, and other animals such as hippos, etc. are known to fight back when a lion attempts to eat them.

Hyenas and leopards are two animals that have the capability to eat lions. They don’t tend to go for the healthy lions. These two usually go for the youth of lions or for the elderly and sick. That sums it up though, lions don’t have too many threats to worry about!

Also, to add to the above, when a lion is sick or laying dead, vultures tend to take advantage. Ants, some birds, and more will take the opportunity to get their luxurious meal when it’s helpless.

I’m sure you already expected to see a long list the second you decided to research what lions eat. Instead of listing each and every animal or thing they eat (you’d scroll for a mile), I’ll get into popular choices for a lion along with general groups. Lions will eat zebras, goats, pigs, antelopes, wildebeests, and more. Surprisingly, a lion would much rather go for already weak and dead animals as opposed to hunting fresh ones. It’s the same end result with less work, can you blame them?

Lions need a lot of protein and energy so you can expect that they eat rather meaty meals. Now, lets get into what African and mountain lions eat.

African lions are carnivores as you may have expected.  I listed a few animals that most lions eat and African lions do eat just that. If you want to narrow down the list of what African lions may eat, take their location in consideration. They are located in central and southern Africa and so you can obviously not expect them to eat a goat located in America (unless it was transported there but we are excluding small possibilities).

Mountain lions differ a bit in their diet. They eat raccoons, coyotes, deer, and common livestock. Compared to the african lion and other lions, the mountain lion actually also eats other “small game” including squirrels, mice, rabbits, rats, and more. This can be be due to the fact of where mountain lions live and what’s around them.

Mountain lions too require a lot of meat and protein on a daily basis so they take advantage of whatever crosses their path!