Birds – What They Eat and Shouldn’t Eat 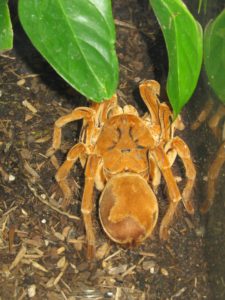 Birds are known to eat many insects and small animals; however, they’re also known to sometimes eat themselves. A few of the biggest birds (such as owls, eagles, and hawks) usually have very-little, to no, natural predators and prey on the smaller birds. There are many different species of birds and they all have their own habits and actions. Some scoop down near the water, others dive in, and their are different birds for different regions of the world. So, first off, what eats birds on land?

The amount of predators that birds have on-land is insane; the bird is food to many animals. Out of all bird consumers, one stands out quite well actually. The Goliath Bird-eater (as seen in the picture) – this bird predator can be found in northern South America. As a matter of fact, the Goliath bird-eater is actually a spider from the tarantula family (caught me by surprise too)!

Other than the abnormally large spider, there are other enemies the bird should watch out for as well. Cats (both domestic and wild) are known to kill and sometimes even consume birds. The cat is a sneaky, observant, and smart animal that can certainly out-trick the bird. The domestic house cat is known to kill more than 500 million birds each year (making it one of the bird’s main predators).

On top of that, there are many carnivorous animals that eat birds. Lions, tigers, leopards, dogs, reptiles – including snakes, raccoons, opossums, and weasels are just a hint of the animals that prey on birds. The list can go on and on as their are many predators of the bird species. The animals listed above are just the majority of which animals eat birds. There are others and they’re hungry as well!

What do Birds Eat?

Birds eat a lot of things and they enjoy so much of what nature has to offer them. Surprisingly, even though most birds have small stomachs, they will eat as much as they can (within limits though). Most birds will eat seeds, fruits, nuts, and many insects, the insects birds eat vary from beetles to worms and anything else small. When it comes to nuts, they enjoy and should have almonds, pistachios, and peanuts as it is a great source of protein and fiber for them.

The foods mentioned above are actually great to place on a bird feeder. On top of that, birds are also huge fans of grains and seeds so if you’re looking to feed birds it’d be a good idea to keep that in mind. It’s also good to know that there are many different species of birds out there so the answer to what birds eat will surely vary. What a hawk will prey on isn’t similar to what a parrot would need. Nonetheless, overall all birds need the same nutrients such as carbs, fats, proteins, etc.

In conclusion, if you put birds as a whole, they will eat a variety of seeds, fruits, berries, other birds, insects, and grains. They have a lot to choose from to say the least.

What to Not Feed Birds

Contrary to popular belief, you should not feed birds bread. There are a few things you should not feed birds but bread is the most popular and it is not good for them. Now, here’s why: bread has little to no nutritional value and fills them up. A bird does not know that and will basically get full without having met his or her’s dietary needs. Though this was not meant to be discussed in this post, I figured it is something worth mentioning.