What Eats Snakes and What A Snake Eats

Whether one is driven by curiosity or is experiencing encounters with a snake, he or she may wonder what eats snakes. The food web is a complex system of predators and prey which includes almost every species, including snakes. There is an enormous amount of different types of snakes, each type or group of snakes have their own predators.

So What Eats Snakes? 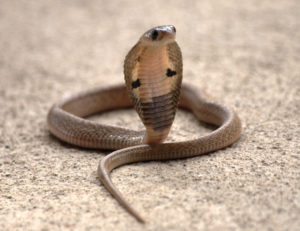 When researching the predators of a snake, a variety of groups of animals will show up. As previously stated, each type of snake will encounter something different or new that will eat them. From all of the bird species out there, not all will eat snakes. The eagle and the hawk usually eat most of the snakes out there. Other than the eagle and the hawk, other birds also eat snakes as their main prey.

Aside from flying vultures, the snake also has on-land animals that will eat them. One particular animal that preys on those slithery snakes is the mongoose. The mongoose can also, surprisingly, eat poisonous snakes such as cobras. The mongoose has the ability to consume poisonous snakes because of their immunity towards venom. As strange as it may sound, the mongoose is also able to repel snakes with their urine. In conclusion, the mongoose consumes, repels, and scares away snakes. What a mixture.

With such a diverse amount of types of snakes, three animals alone won’t be their only predators. Weasels, foxes, and a few other mammals eat snakes as well. Furthermore, there are big snakes that will eat smaller snakes when possible, or, when they feel like it. With a variety of this many predators, snakes also have their prey. The size of the snake will affect what they eat; some snakes eat rodents and other snakes have the capability to consume something the size of something bigger than a dog!

What do Snakes Eat?

There are many different snakes out there and each one has it’s own taste. Generally speaking, snakes like to eat their prey whole. It’s not like they have much of an option considering they don’t 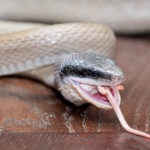 have arms and hands; so overall it worked out for them. Nonetheless, snakes eat many, many things. They’re huge fans of rodents such as mice and rabbits. Snakes enjoy having a buffet of options and don’t stop at just rodents, they will also eat frogs, eggs, insects, fish, and reptiles. Furthermore, they even eat other snakes!

The list given above is just categories of animals they’ll eat. For example, snakes, lizards, toads, and frogs all go under the reptiles section. To get a bit more astonishing, it’s a bit crazy but these slithery reptiles also eat bigger animals. Big is generic so let me get more specific. By big I mean that snakes also eat goats, pigs, chickens, and so on.

It’s good to know that the size of the snake will generally determine what they eat. A small, non-venomous snake would eat insects and smaller animals as opposed to an anaconda (who first constricts their prey before eating) that has the capability to eat animals who are 5 to 6 foot (basically the size of a human).

To conclude, snakes are carnivores so they eat just about anything with meat that was living. From insects to pigs and animals that are as big as humans. Now let’s get into two specific snakes: the garter snake and corn snake.

What do Garter Snakes Eat?

As stated above, snakes are carnivores and eat just about anything living BUT it’s in respect to it’s size. A garter snake eats smaller meals and are huge fans of pink baby mice. They also eat many insects such as earthworms. A garter snake will also be able to eat guppies or platies (very small fish), frogs, toads, salamanders, and more. However, if they’re granted the opportunity, they’ll also aim for small mammals.

It’s good to note that ideally they should have mice as the core of their diet/meal-plan. A garter snake, along with essentially any snake, will eat different things when raised in a home or in the wild. Overall though, they should eat insects and mice and once in a while fish and other amphibians wont hurt.

What do Corn Snakes Eat?

Similar to the garter snakes above, corn snakes share similarities in their diet. Their primary meal that is very nutritional to them are rodents. Mice or rats should be your go-to if you are the one feeding a corn snake. A great idea is to allow the snake to share the action and even though it may be dead just dangle the meal above them so they can feel as if they’re doing the hunting. Corn snakes do constrict their prey before eating so allow them the privilege.

On occasion, a corn snake can eat other amphibians and reptiles. Luckily corn snakes aren’t picky so it shouldn’t be too tough to feed one (or a few).

Where do Snakes Live?

Snakes can be found almost everywhere. Where they live influences their diet and other factors of their life so it’s important to know where snakes live. Different species of snakes will scatter across Earth so you won’t find every snake breed everywhere. However, overall, at least one type of a snake can be found everywhere excluding: Iceland, Ireland, New Zealand, Greenland, and Antarctica.

The reason for why they live everywhere excluding the places above are because of resources, shelter, and safety. All of what they eat can be found where they currently reside in. Alongside that, they also have many tricks to hide from predators or attack their prey on land or in water (depending on the type of snake).