What eats a Fox, What Foxes Eat, and More!

What eats a Fox?

Though the fox isn’t as aggressive as lions and other animals, they still are fearsome to many animals (even me!). As every other animal they have their prey and predators. Each continent 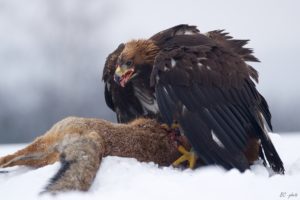 has their own species, or type, of fox. North America is one of the homes of the red fox, and there it can be eaten by many different things. So, to get to it, what eats a fox?

The red fox, in particular, is consumed by many different animals. Occasionally special circumstances of scarcity may play a role in who’s the predator and who’s the prey. Situations aside, one animal that likes to snack on the red fox are cougars. Cougars have taken the red fox and placed them as a meal where they get a lot of protein and other nutrients from. That isn’t it though, many other animals are considered fox vultures.

As a matter of fact, even eagles prey on these foxes. The golden eagle will eat the fox regardless of their age (pup or adult – doesn’t matter). The fox is not safe from above nor from their surroundings. They have bobcats, leopards, lynxes, and even more animals to worry from in their daily life. Coyotes are another predator of the fox as well even though their are times that they’re in harmony.

What do Foxes Eat?

As you may know if you’ve read a few post in the food-web page, a fox eats many things. What else can be expected? Them along with lions, wolves, and a few other animals are at the top of the food chain. Furthermore, a foxes diet doesn’t only consist of rabbits. They also eat mice, birds, insects, other small mammals, fish, and crabs; they also tend to eat vegetables, fruits, and berries due to the fact that they’re omnivores. One of their favorite fruits are apples as one of their favorite berries are blackberries. Now, let’s get into some very common questions regarding what a fox eats.

Do foxes eat raccoons? Yes they do. Primarily red foxes will but raccoons along with other mammals are a great source of protein for any fox.

Do foxes eat cats? Yes. Foxes will not go out of their way for a cat as they have other preferences but they won’t object to a cat or two.

Keep in mind that what a fox will eat varies on where a fox lives. Below we will get in depth on “where do foxes live?” which is essential to know considering that their diet is based on their location. Foxes also may tend to go through garbage cans or pick up roadkill if they are granted the opportunity. They have many options to pick from them and won’t disregard a single one.

Where do Foxes Live?

Here you will learn about where foxes live. By knowing this you’ll understand their relationship between their predators and their prey. Most foxes tend to live in dens they create for themselves or that they stumbled upon and found suitable for their needs. These dens are located underground, in a hollow log, or inside bushes. Most foxes have adapted to human communities and because of this the variety of prey they may have elsewhere simmers down to rodents, cats, rabbits, and the like.

Foxes essentially live everywhere in the world except for the continent of Antarctica. They also, to state the obvious, will not live on, or in, oceans and those random islands that can be found spontaneously around the world.  They adapt well to most environments so you normally wont find them struggling and their wide variety of food choices help them sustain their health wherever they live.

Food Web, Predators of a Fox