What Eats Raccoons and What do they Eat?

To understand what eats a raccoon and what they eat you should know the basics such as: where they sleep and what attracts them. To understand the lifestyle of a raccoon you can easily understand why certain animals prey, or are preyed upon, by a raccoon. 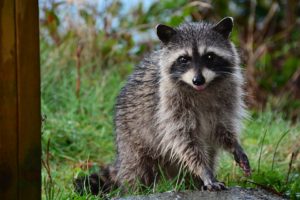 A quick list of what eats raccoons are: certain birds (such as hawks and owls), humans, snakes, wolves, cougars, coyotes, bobcats, and lynxes. Now, lets get into detail.

You see raccoons being the predator to many different animals in the food-web. You may have noticed that if you’re a regular reader of the Wild-Life category. Raccoons have many meal-options, they feast, snack, and leisurely enjoy a variety of different animals (will get more in depth under the what raccoons eat section) but the same thing is done to them.  Once grown they become aggressive and are able to protect themselves well. The predators of a raccoon are usually aware that they will have to deal with a fight to catch their meal (in most cases at least). So what’s able to put up the fight and win? Whats able to eat a raccoon?

When a raccoons aggression fails, they resort to their defenses. Their defense mechanisms aren’t very effective but it helps in a few scenarios. Raccoons can quickly climb up or down trees to escape their predators. This is good when being chased on land and needing to escape. Their aggressive nature also helps them fight off predators when need be though they will not always win.

To name a few bobcats, cougars, owls, wolves, and coyotes are predators that prey on raccoons. Varying on the regions of the worlds, their predators will change. Lynxes and crocodiles are also potential consumers of the raccoon. Aside from what was just mentioned, their are also hawks and different species of snakes, such as the boa constrictor, that feast on raccoons. With a snake as an enemy, it may sometimes come down to a race of: who can climb the tree faster?

Lynxes, crocodiles, a few avian’s, reptiles, bobcats, coyotes, cougars, owls, and wolves are the main predators of the raccoon. Though as mentioned, scenarios and various regions of the world may alter this fact.

What are Non-Animal Predators/Killers of a Raccoon?

Humans are one of many predators that raccoons get eaten by.  Humans are known to capture, kill, and eat raccoons. Aside from eating raccoons, we also negatively affect their population in numerous ways. From crashing into them with vehicles to destroying their habitats and so on.

The raccoon, sadly, has more things to worry about other than the harm humans do to them and their predators. A disease, known as distemper, quickly kills raccoons. This disease has the potential to harm a whole community of raccoons. That is the main disease raccoons can suffer from however, there are two others including (but not limited to): roundworm and trichinosis. In conclusion, raccoons can die from numerous things. Humans play a role in negatively affecting their habitual environment, being a predator, and killing them for recreational purposes.

What do Raccoons Eat

Similar to almost all living things, raccoons need some form of nourishment to live. The raccoon is an omnivore meaning they eat meat/animals and greens/vegetation. Because of so they have a wide variety of options to choose from. However, before digging deep, let’s tackle two common questions.

Do raccoons eat chickens? Yes, if they have access to chickens it can, and most likely will, happen.

Do raccoons eat cats? No, cats and raccoons try to ignore each other and mind their own business. If they decide to tussle then they may cause harm to each other but that’s rarely the case.

As those two concerns are now taken care of, let’s cover some of a raccoons other prey. Essentially, raccoons usually tend to eat almost everything. They scrummage through trash (which is why many homeowners try to trap one), can eat from your cat’s food bowl (which is why cat’s like their bowls raccoon-proof), and this last can go on for a while but let’s cut to the chase. It’s common for a raccoon to eat pet food; if they’re in the wild they’ll fetch some berries, other fruits, nuts, grains, eggs, snake, livestock (yes, including chickens), frogs, squirrels, just about anything they can get their hands on and won’t be overpowered by. In summary, a raccoons diet should consist of almost anything and everything not toxic to them. 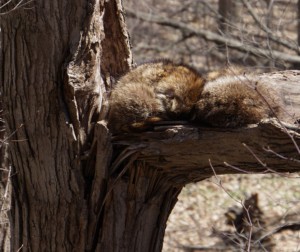 As if that wasn’t enough details already right? Well, it may or may not have been but we’re trying to ensure everything is explained here and so this section may help a few of you. To understand what eats raccoons and what they eat you need to also understand a bit about them. By doing so you’ll have a deeper understanding as to why some of the answers given above were given to begin with. Now, we’ll keep it simple and to the point so the first and only thing we’ll really discuss is two common concerns.

For the former, raccoons sleep in a forest, bush, abandoned homes or cars, wood, nests they found, and so on. During winter and other rough times you can find them in a more cozier environment. Regularly though you can expect to find one sleeping in many, many places (some places you may not expect). There are even some occurrences when a raccoon will decide to sleep in a chimney or garage even if you didn’t invite them in. To prevent that from happening we can discuss what attracts raccoons so you’ll know what to and not to do/have.

To prevent raccoons from visiting for whatever reason is not to complicate. It’s good to stop a problem at the source rather than waiting it out and needing to learn how to trap one. The most common thing that brings these unwelcome guest over to any place is food. So, by eliminating their source of food (whether it’s in the garbage can or in your dogs food bowl) is the first greatest step you can take. To extend onto that, keep in mind raccoons also eat animals such as birds, their eggs, and other wild life so if you have an issue with raccoons you may have another animal species living in your yard without paying rent!

Food Web, Predators of a Raccoon