What Eats Turtles and What Different Turtles Will Eat 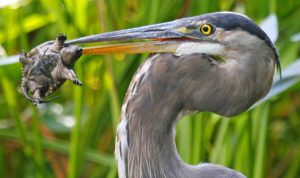 From Sea Turtles to Lake Turtles (or known as freshwater turtles) the predators differ. What eats turtles are (obviously) either a carnivore or omnivore. In some cases the baby turtle will have more animals preying on it than the older fish. However, sometimes it makes no difference to the vulture.

Many of a turtles predators are surprisingly not aquatic, but, nonetheless, there are still marine predators as well. Some of these aquatic predators include: bass, catfish, and sharks. The sea-turtles biggest worries are about the tiger shark – a very menacing enemy to them. They also do, however, need to worry about crocodiles. Crocodiles snap their jaws through a turtle’s shell, or attempt to, until they get to the meat.

Preying on Turtle’s Since they were Born…

A sea turtle is laid and hatched on the beach. These baby, undeveloped sea-turtles are sometimes eaten by vultures. Once hatched they run to the ocean as fast as they can and within this time period they can be eaten by multiple types of birds. Aside from birds, the sea-turtle must stay safe from raccoons, jaguars, and so on.

Turtles, all types, have many different types of predators. They can’t always be safe but their protective shell does save them from many other animals. Without their shell they would be in a lot more trouble than currently (if only snails were as lucky). Surprisingly, it seems like many animals eat each other because the snapping turtle sometimes will feast on younger turtles. 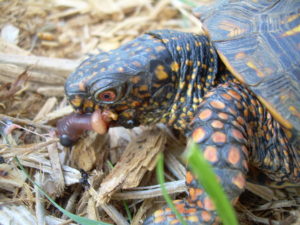 What do Turtles Eat?

After getting into depth on the predators of turtles, let’s look into what, or who, they prey on. Their diet and what they eat will surely vary on the type of turtle it is and their age.

Sea turtles will most likely prey on softish marine-life (such as jellyfish and sponges). However there are also sea turtles that are considered to be herbivores; they will feast on the algae. Many different species of turtles exist so we’ll get more in-depth below.

Painted turtles will eat bugs, shellfish, vegetation, and even other aquatic life. Other species of turtles will eat similar things. Protein is quite important in a wild turtle’s diet especially if they’re young. A pro tip, if you’re feeding a turtle, is to NOT feed them anything processed; keep it all healthy, organic, and natural.

As turtles break down into other species, so do box turtles. There are many sub-species of a box turtle and so it’s always recommended to know what box turtle you’re specifically looking into. Nonetheless, I’ll be discussing what all of box turtles eat in general.

A huge thing for box turtles are insects. You should feed them insects such as caterpillars, earthworms, spiders, snails, and grasshoppers. Essentially what a pet box turtle eats should be as identical to what a box turtle in the wild will eat. Alongside that, they also eat grass, berries, over ripe fruit, and even flowers.

Leatherback sea turtles have a very exclusive diet. They will only eat jellyfish, sea squirts, and other animals that have a very soft body. They don’t bother with anything they can’t chew which allows them to easily eat what they eat.

To sum it all up, they have their predators, but they also have their prey. Humans play a huge role in the decreasing population of turtles, and turtles help maintain algae levels in the ocean. It’s a cycle that’s never-ending in the food web.