What Eats Snails and What Snails Eat

Snails, along with most insects in the food-web, aren’t very lucky. Many different insects and animals prey on snails for a meal or snack. The snail is also extremely slow so running away from their vultures is a little tough. So, what do they do? Well their options are limited but they do have natural defenses. For example, they can blend in with their surroundings, and/or hide away in their shell (though their shell isn’t as tough as a turtle’s). Which leads to the probable issue of their defense mechanism – that most predators can just break through their shells. Nonetheless, what eats snails? 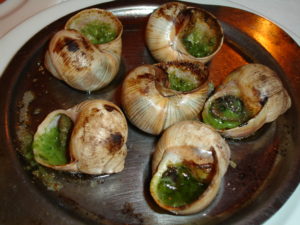 A very big threat to snails are humans – usually from the “higher” class as some books or movies will convey. Snails are known to be a delicacy and can be found in places such as Paris, France (you see their population dine on snails in some films). These aren’t just any snails that you find in your garden, they’re farm-grown and fed a certain diet to be kept healthy and, from their perspective, delicious.

There are many other predators that feast on snails aside from humans. A mass variety of birds eat snails as well from geese and chickens to ducks and seagulls. Some birds catch their opportunity during migrations others just where they live.

Snakes and other reptiles are also known to be snail predators. Frogs, toads, snakes, and lizards, such as salamanders, won’t object to a plate of snail! Snails can’t do much to their predators since they’re quite defenseless. Because of this, these reptiles and amphibians find them to be an easy-to-get snack.

Snails have more to worry about though. Other insects, themselves, and mammals, eat snails at occasion. The raccoon is one mammal that won’t mind an occasional feast. Snails are also cannibalistic, larger snails will consume the less fortunate smaller snails. Finally, to conclude, beetles are one example of snail-eating insects. They eat the snails and leave their shells on the ground.

Before getting into what snails eat, I think it’s good to know what they can’t eat. First things first, no salt. Salt can actually kill snails and so it should be as far from snails as possible. Alongside that, a snail should not eat starchy or contaminated food. Everything should be pesticide-free and natural. Those are the few things they can’t eat so now let’s get into what a snail can eat.