Algae – What it Eats, What Eats it, and How to Prevent it

If you find yourself searching for what eats algae then most-likely they’re looking to put the predator of alga in a fish tank. To put sea-life in a pool isn’t a very popular choice and it may not be the healthiest for either the fish or the swimmer’s (if you’re looking to get rid of algae in your pool we’ll get to how to do so without sea-life soon). 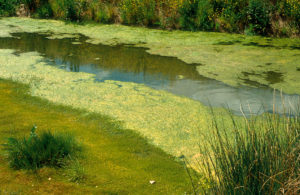 Some fish that consume algae are the plecos. The pleco is the most common algae-eater used in fish tanks. You most likely have seen them in many fish tanks and aquariums, the fish that’s sucking on the wall. This fish (the pleco) is actually devouring the algae or soon-to-be algae. Keep in mind that the pleco can grow quite big as compared to their size when they were young; also, their waste will need to be filtered or the nutrients of the alga is still there and they can come back.

Other water-life that eats algae are known to consume alga as they’re young. The youth of frogs and other aquatic animals usually eat algae to sustain their diet. Otocinclus is another type of fish that eats algae. The otocinclus similitude’s the pleco in looks and habit. They also grow around 5 cm shorter than the pleco so if the space is limited this may be your best bet.

If you own a pool you may not want some fish sucking on the walls of your pool. There are ways to prevent getting algae so you don’t need to worry about how to clean the green slime off your walls. You can buy Algae Control for your pool and watch as the progression of algae digresses.

How Does Algae Thrive and What Does it Eat?

You may have found algae in your pool, a lake, ocean, or really in any body of water. After getting into what eats algae, it’s good to understand why their is alga in your fish tank or pool. With a better understanding you’ll be able to get rid of it with ease. Algae thrives because it gets the energy needed to sustain its life and expand it from the sun. There are different types of algae which are shown by their color but they all can be eaten nonetheless.


Algae grow/spring from turbidity, light, water temperature, nutrients, and stable conditions. It’s hard to get rid of all the alga growing factors but you can surely get rid of some and slow the growing process down.

So overall algae gets their nutrients from photosynthesis. However, one species of green algae has the ability to break down and eat very minuscule plant materials. And that is the simplest answer to what does algae eat.