What Eats Wolves and What A Wolf Eats

What Eats Wolves – A Wolves Predator

If you’ve kept up with the articles on the food chain you can see how high up a wolf is in the web. A wolf preys on many animals all around the world and gets around many natural defense mechanisms as well. So it makes you wonder, what eats wolves? Well it surely isn’t a majority of their prey and it’s not most marine life.

Wolves are known to travel in packs, they go and hunt together with their leader – the Alpha Wolf. I’m not sure of any animal that can take down a whole pack alone. Some predators of a wolf have tricks up their sleeves (if they wore sleeves) and try to either single a wolf out or only target the one that’s already alone. As a pack, in most scenarios, only humans are able to take them down. Humans can’t take them down naturally though, we usually are using traps, guns or other forms of weapons.

Wolves are very aggressive and only eat meat. It can be presumed that any animal which may eat a wolf obviously also eats meat so we narrow it down to organisms which are omnivores or carnivores. And to be quite honest with you, we can also narrow it down to just a very limited few whom have just the capacity to hunt down a wolf. Keep in mind that though an animal may have the potential to kill a wolf they normally wont. A wolf is an animal not to be treated lightly and most wildlife know that by now.

Other than humans, there are other animals that eat wolves but they do it differently. These other attackers don’t have the capability to kill wolves in multiples as previously mentioned. Unlike most encounters between a predator and their prey, the predators of wolves aren’t meant to meet. Mountain lions and bears both never intend on meeting or eating these wolves. The mountain lion and bear accidentally meet up in most scenarios and when that happens the fight occurs. These scenarios are typically to represent territorial interest, prove the individuals dominance, or to keep their hunt (what they intend to eat) for them self.

Last but not least, the scavengers. Wolves die from sickness, old age, and from many other reasons. These dead wolves still play a role in nature. The dead wolf now serves as food to many scavengers around such as birds, ants, rodents, and more.

So, in conclusion, the answer is: scavengers, humans, mountain lions, and bears are the main predators of wolves.

What do Wolves Eat?

Wolves eat a lot of things. Before getting into detail, I’d like to get two common concerns down.

Do wolves eat snakes? Yes, wolves are open to catching and eating a snake.

Do wolves eat coyotes? Yes. Coyotes and wolves target almost the same prey so they may get into conflict over ownership of a meal.

Now, with that aside, we can get into more details about what wolves eat. As you may already know from before or by reading about what eats wolves, in most cases wolves travel in packs so they have the capability to take down some big animals (this will be described best under our how wolves hunt section below). Some of these big animals are bison’s, moose, elk, livestock such as cow’s, caribou, deer, goats, and the list can go on.

A wolf wont always aim for these bulky, meaty meals. Sometimes they go for the easier targets. These easier targets are usually animals such as: rabbits, ducks, beavers, frogs, lizards, birds, bird eggs, and just a wide variety of different animals. This allows them to not have to coordinate an attack with their pack, and you can think of them as a snack for a wolf.

Wolves can’t survive off of just meat though so they incorporate fruits and vegetables into their diet as well. They eat many, many berries, apples, pears, grass on occasion (keep in mind wolves are part of the canine family), and a variety of vegetables. 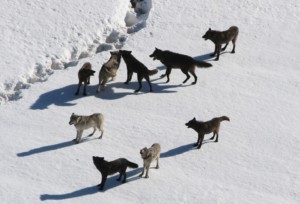 How do Wolves Hunt?


Wolves hunt in packs. That has been reiterated many times but it’s essential to know to understand how wolves hunt, what they eat, and what eats them (more importantly how it’s possible). A pack of wolf typically consist of 6-10 different wolves. These packs try to single out one victim as their prey and subtly try to approach them so they’re close enough to go in for the kill.

Depending on who they target, they may need to go on a “high speed chase” in attempt to tire their prey out; these chases can last for a while. On top of that, it can sometime take the pack a considerable amount of effort to take their meal down. If it’s a bison, for example, then  the chance of survival for the bison is higher than that of a beaver. On the slight chance an animal escapes an ambush of wolves, the damage done is usually almost always very sincere.

Food Web, Predators of a Wolf