Owls – What They Eat, Who Eats Them, and Where They Live 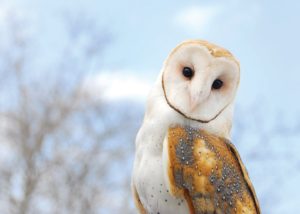 I’ve always thought of owls as somewhat mysterious. A shape aliens take in some movies, the owl looking into a window at 2 am, the “hoot” you randomly hear. To be such a mysterious creature, the owl needs to eat so they can get their energy and remain being peculiar. However, it’s not a one-way street, though the owl has it’s prey it also has its predators. So what eats owls?

The fox and the prowling cat. Both animals attempt to snatch the young from an owl’s nest. These two animals do put themselves at risk when subtly trying to eat a young owl. The parent owl will protect their youth at all cost and they have the capability of killing these intruders.

Aside from them, their are also flying predators that owls need to watch out for. Eagles, hawks, and even other owls kill/feast on owls. The reason eagles, hawks, and owls them self attack other owls isn’t always for dining purposes. These three different flying species conflict against each other for territorial purposes. They either have a stubborn state-of-mind and demand that a certain area is theirs or they want new areas to hunt. They will either defend their certain hunting space or invade and expand onto new grounds.

Who Else is Preying on Owls?

As previously mentioned, prowling cats tend to feast on the youth of owls. However, there are many different types of prowling cats. These include, but aren’t limited to, bobcats and coyotes. Aside from the variety of prowling cats that answer the question of “what eats owls” there are others. Many serpents that have the ability to climb up trees will snack on these baby owls and owl eggs as well!

One more predator of the owl is us humans. Though most of us may not be eating the owls, we are negatively affecting their population. As humans expand onto new land and bring industrialization with them, owls (along with other animals) have less ground to move and hunt with. Their territorial instincts become more in-use so they kill others more, the environment isn’t as clean as it used to be, and when they hunt they may fatally run into something human-built (like a car).

What Do Owls Eat?

Owls eat many things and are one of the top birds (aside from eagles and hawks) so they have a wider range of food options as opposed to smaller birds such as a parakeet. Owls are huge fans of rodents and small quick catches. This includes skunks, moles, squirrels, rabbits, mice, rats, and more. Furthermore, owls enjoy a variety and eat insects such as spiders, worms, beetles, and so on.

Owls also eat owls. They’re their own predator and prey. Though they won’t always go for an owl they’ll go through with eating one when it comes down to it. Owls are also known to eat small birds and falcons. A small possibility also exist in which a owl may prey on a dog or cat however that’s rarely a case.

To conclude on what owls eat, owls also prey on frogs or lizards at times as sort of a swoop and eat snack on the way. Different owls will eat different things and part of that is dependent on where they live which I will get into below.

Where Do Owls Live?

With many, many different species of owls, they can easily spread and live almost everywhere. The only continent you will not find an owl in is Antarctica. You’ll surely be able to find at least one species of an owl elsewhere. However, though owls live on so many continents, they dont’ live in every habitat.

Owls have adapted to their surroundings and our changing world and can live in forests, mountains, deserts, and plains. These owls take over a squirrels nest, live in the holes you find in trees (that you most likely have seen in some cartoon or drawing before),  or the top of a barn. To add on to that, owls are really open-minded when it comes to shelter and as long as they find a place that suits their needs they’ll go for the opportunity right away.