What Eats Frogs, Where Frogs Live, and What Frogs Eat 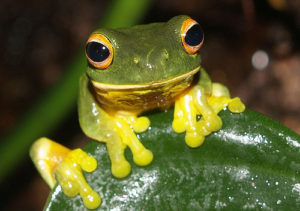 A frog feasts on many things but is also devoured by many more things; more than I expected. Almost all of ‘What eats frogs’ are always living in the same habitats as them (excluding some special situations). Whether the frog stays underwater, prefers to be on-land, or is poisonous, they’re still prey for other creatures.

The frog is a snack and meal to many; they have both marine-life predators and on-land predators. Lizards, raccoons, foxes, weasels, otters, and even shrews feast on these tasty (to them) frogs. Snakes eat frogs as well, they usually ambush them to use the element of surprise against them – pretty smart if you ask me. However, these on-land animals aren’t the only things that devour frogs, humans do too!

Frog legs have become a snack to many of us humans. They’re even a luxurious meal in some countries! France is one of the main places that is known to eat these frog legs. If you plan on hunting some of these frogs for your own meal (to try something new or to precisely pick which frog fancies your taste), then make sure you don’t pick one that’s poisonous. Getting back on topic, those are the main on-land predators. The frogs aren’t safe in the water though, and below, you’ll discover why.

Marine-life Predators of a Frog

In the water, the frog can be consumed by a variety of things. Many fish, and even turtles, include frogs in their daily diet! Frogs, even in the water, have a surprise coming for them! A few types of birds are known to dive into the water and catch their food. These birds are known as “water birds”. All of these animals, and us as well, are the answer to the question “what eats frogs”.

What do Frogs Eat?

Every species of frogs will eat different things. Below I will specifically get into what tree frogs eat but for now, let’s talk on a general scale. Now we’ve always seen some film or picture of a frog catching a fly with their tongue and thought it was either disgusting or really cool. However, a frog won’t eat fly’s 24/7.

As stated, different frogs will eat different things. Nonetheless, overall most frogs eat meat. Worms, mosquitoes, and larvae are all popular for smaller frogs, the larger frogs tend to go for animals such as: small fish, moles, and even mice or rats. Some other great insects for frogs are crickets and worms.

It’s good to note that frogs only eat what they catch so their diet only consist of fresh meals.

What do Tree Frogs Eat?

The answer to what tree frogs eat has already been stated but it can’t hurt to reiterate it. Tree frogs share a rather open diet so it’s not to hard to feed one. However, it’s good to know that a baby tree frog needs a lot of protein as they’re young and grow. The easiest way to get them their protein is through insects (primarily crickets and worms).

As they grow tree frogs still eat mainly insects and to be on the safe side, they usually eat insects that are no bigger than the distance, or width, between their eyes. That’s also something to keep in mind if you’re feeding a tree frog yourself. Alongside that, you should never feed your tree frog, or any other frog, ladybugs, stinkbugs, praying mantis, or millipedes.

Where do Frogs Live?

Frogs live everywhere! Except Antarctica. Now, don’t get me wrong. Not every frog lives in every place they can. Species will vary across Earth depending on a few factors such as what they have become accustomed to, what’s suitable for them, and if they can eat the animals or insects that live around them. Overall frogs will live anywhere that has a moist environment. This includes, but isn’t limited to: ponds, swamps, creeks, rain forests, trees, and lakes.

During winter frogs will adapt to the season. They typically will not migrate but make do with where they are. For example, some frogs may try to stay covered in mud as others will submerge into the water and others will sleep under a lot of leaves.