The Predators and Prey of Baby and Adult Hawks 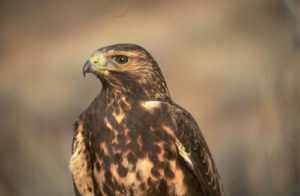 Similar to the wolf, the hawk is another one of the animals at the top of the food chain. Luckily for them, they have many animals to prey on but not as many predators. They’re one of the top-dogs in the bird family as well. The older a hawk becomes the less they have to worry about. As an egg, or a very young hawk, they can be feasted upon by many animals. As they grow older it becomes harder for them to be preyed on. So, what eats hawks?

Before they’re born and even for a period of time after, they’re more in danger than they may ever be throughout their lives. When they are still in their nest or in their eggs, they have a few animals that may prey on them. The main animal that may consume these hawk eggs are any snakes, or serpents, that ventures to climb a tree.

Though they don’t have many and it’s nowhere near how many animals they may prey on, they still have their predators. Hawks, at times, do need to worry about other hawks from eating them – mainly larger hawks in that scenario. Eagles are other avian vultures that can, and, at occasion, eat a hawk or two. Raccoons, red foxes, and owls are also other animals that eat hawks when granted the opportunity.

The amount of predators are few, from the hawks point of view.

Considering how high up a hawk is in the food web, they eat many, many things. If you’re curiously wondering, “what do hawks eat?” then be ready for quite the read even though I’ll do my best to keep it short. Hawks eat a variety of birds (such as blue jay’s, hummingbirds, some owls, finches, and a lot more), and small rodents (including mice).

I hope you didn’t think that was all a hawk may prey on, the list goes on. Even though above I discussed how a baby hawk may be eaten by a snake, a snake may also be eaten by a hawk. Sort of a love/hate relationship if you ask me. Hawks will also eat lizards, chipmunks, fish, other amphibians, and squirrels. Essentially, if it has protein and a hawk can take it on, that’s a potential meal for the hawk.

Here’s another love/hate relationship the hawk species is invested in: raccoons and foxes may eat hawks but the hawk will consume them when they can. It basically becomes a battle of who has the upper hand and won. Keep in mind that when I state a hawk will eat birds, lizards, or amphibians, their are many different types of these species that the hawk will eat.