What Eats Spiders Along with What They Eat 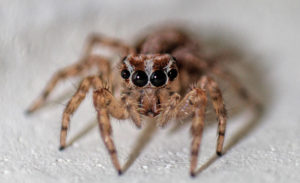 If you have arachnophobia (fear of spiders), or just prefer to not see them anywhere near their house, getting rid of spiders will and/or can be a concern. What eats spiders can be a household pet however, you may not want to keep all their predators as pets. Before completely ridding your house from spiders you may want to take a look at one major benefit of spiders. As this page is about the predators of a spider, we should take a look at their prey. With a spider (say on the door of your backyard – from the outside) they will try to consume other insects from entering your household.

So, What Eats Spiders?

Generally speaking, there are a number of different species and animals/insects that rely on spiders as either a snack or meal. One group of a spider’s main predators are lizards and birds. A few bird breeds that devour spiders are the crows, wrens, blackbirds, bluebirds, and sparrows. Some birds tend to be wary of the spider’s web so they don’t get tangled up and eaten (must’ve backfired on those birds pretty drastically)!

Other than lizards (about 100 different species of them), other amphibians also feast on spiders as they grow older. Some examples are young frogs and toads. With the lizards, toads, and frogs adding spiders to their daily diet there isn’t an abundance of spiders in comparison to other animals and insects.

Finally, though it may come to a surprise, there is another species that snack on spiders. In America the concept of this is foreign to many, however in other countries it isn’t. Humans eat spiders in places like Cambodia, parts of Asia, and many other places. They cook or prep it in a certain way and to some it’s tasty!

Getting a household pet to keep the spider population in your household down is a great idea. However, not all pets look at spider as a tasty snack. Your options of household pets to choose from isn’t as broad as you may expect, only a certain few pets will do. So what are these pets?

Lizards, frogs, and cats are your best main options. Cats usually kill many other insects as well actually so you shouldn’t be having as many with a cat around. Cats also usually eat what they kill once they kill it.

What do Spiders Eat?

I’m almost certain you must have seen a small insect fly into the web of a spider. Sometimes it’s not even a small insect, insects such as crane fly’s or butterflies can fly into a spiders web. Essentially, a spider will eat what fly’s into its web as a small snack however that’s not where they end their hunt.

Some spiders, such as the Goliath Bird-Eater eat birds (which is how it got it’s name). Alongside that, spiders will eat many other insects and even small rodents when granted the chance. Not all spiders are carnivores though. A few species are known to eat fruit and enjoy their herbivorous diet. In addition, some spiders are also omnivores and keep their options open.

To conclude, spiders eat almost anything. If you look at them as a whole, you’ll find them to be predators of many insects, rodents, and even some animals. Once you get into a specific spider then you can narrow down your search.

If you’re wondering if spiders sleep as humans do then no. After studying what eats spiders and what they eat, it’s good to know about their resting/sleeping habits to understand the connection. They do have to rest but they do so wisely. When a spider sleeps he or she prefers to sleep either on their web or in small cracks where they can’t get harmed (though that’s not always the case).

So to keep it simple, they rest but don’t officially “sleep”. However, science is always discovering new things so the answer is only currently correct.