The Predators and Prey of Different Crabs 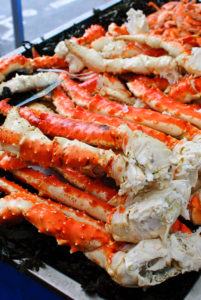 Crabs. They’re yummy aren’t they? I personally never object to eating crab at a restaurant or a buffet. Dipping the meat into melted butter, quite the luxurious meal if you ask me. As a matter of fact, one of the main crab predators are actually humans. Either for fun or for commercial purposes, humans catch and consume many year round. Aside from humans, let’s look at animals – what eats crabs?

All crab predators share at least one common quality. They don’t let the hard shell (if only a snail was as fortunate) to become an issue. They are either able to eat through the shell or can get around and/or break it to get to the crab meat. Birds are great examples of this; some birds will pick up small crabs and drop them from afar. By doing so, the shell will break and the birds can now peck on the meat.

Eels, striped bass, red drums, and croakers are a number of some fish that also eats crabs. Their method, to deal with the hard shells, is to either feast on them when they’re small or molting (a form of shedding some may say). The fish mentioned particularly enjoy blue crabs and feast on them year-round.There are many other vultures beside humans, the fish mentioned, and birds. Crabs, along with other animals, are cannibalistic – the larger will typically the smaller.

Raccoons, otters, and alligators also enjoy a crab leg or two. As long as these predators are near the shore, and crabs are also coincidentally there, then they’ll have their meal. Omnivorous and carnivorous turtles will consume crabs and share in the luxury other predators enjoy.

In the end, crabs are enjoyed by different regions, species, and animals. Though they have a hard shell some animals, and humans, do get around it.

What can I say? So many different types of crabs exist so, as always, I’ll generally list out what crabs eat and get into a few specific types of crabs below. Overall, crabs will eat plant and animal matter that they come across. Some crabs will eat algae, others will eat worms, and a few crabs even consume other fish and crustaceans.

Now, lets get into specific crabs.

Hermit crabs can eat many things so it shouldn’t be too hard for them to find a meal. However, they don’t want the same meal every day so whether you intend to feed a hermit crab yourself or just would like to know about what hermit crabs eat, keep in mind they don’t want to eat the same thing all the time. Hermit crabs will eat grass, fallen fruit, plants, plankton, and wood. There have even been some instances that a hermit crab will eat feces even though it’s not in their best interest. Nonetheless, this proves to show how open they are to eating whatever.

Some fruits that hermit crabs can eat are berries, pineapple, grapes, guava, apples, bananas, and the list can go on. They also can eat vegetables such as broccoli, corn, or spinach. It’s also recommended that a land hermit crab eats seeds, fish, and meat.

As you now know a majority of what hermit crabs can eat, you should also know what they can’t eat. Do not feed a hermit crab anything that is processed whatsoever. As long as hermit crabs eat natural food they would have eaten if they were in the wild then everything should be fine as long as it’s all under proper moderation.

Fiddler crabs are also open to eating many things. They are considered to be scavengers and so if you need to feed one it won’t be too hard. A fiddler crab eats algae, shrimp, krill, fish, and bloodworms (to keep the list short). They also eat plankton so the cost of feeding a fiddler shouldn’t be too much.

Sand crabs primarily eat plankton; that is essentially all they care for. Sand crabs are really small so it’s not like they can go and eat shrimp or fish the way a fiddler would.

If interested in how a sand crab catches plankton, keep reading. Sand crabs are almost always underground but they allow for their antennas to be exposed. They face the sea and when waves come in they expect for plankton to come along with it. When that happens, the sand crab will have caught it’s snack or meal.