What Eats Squirrels, Where Squirrels Sleep, and More!

Poor squirrels, a cute innocent creature to us, but a yummy snack for others. “What eats squirrels” is a common question asked because in all 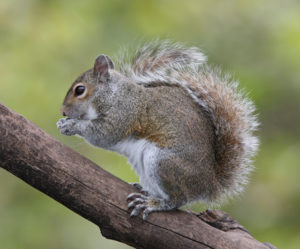 honesty, who would want to eat such an innocent creature? Well, a lot of different animals actually!

The squirrel does it’s best to hide away from predators and live a longer life. It naturally has a coat that gives them the ability to unintentionally blend in with their habitat. Some predators, however, are a little too smart for such a trick. Prairie dogs, hawks, owls, wildcats, weasels, coyotes, foxes, bobcats, badgers, and rattlesnakes are all but a few of squirrel vultures. It seems like a lot of animals are from the feline family.

The squirrel has 4-legged predators, 2-legged predators, predators with no legs (such as the snake), and some that fly! Out of all 200 species of squirrels, all of them have vultures to worry about and run away from. All that being said, it may come to a surprise that most squirrels live for quite some time! Their lifespan is about 6 years in the wild (and 15 years captivated) which is more than what I’d expect.

What do Squirrels Eat?

The most obvious answer to “what do squirrels eat” is nuts. You’ve seen it in movies like the Ice Age and other films. The point is that it’s a well-known fact that they eat nuts but, are nuts enough for them to survive? Possibly but not for long. A variety of nuts are essential for a squirrel to be healthy but they need to eat other things as well to get all the nutrients and minerals they need.

Before continuing, it’s good to know that there are different squirrels that enjoy different mixtures of food. Red Tree and Grey Tree squirrels share a similar diet. They both normally eat fruits, nuts, and seeds year-round. As far as fruits go, berries are one of the top favorite fruits squirrels look forward to however watermelon, apples, and grapes can also be fed to them in moderation.  On occasion they’ll also indulge fungus and insects; on top of that they may even stoop down to eating tree bark or soil when their resources are limited.

A funny fact is that Grey Tree squirrels sometime steal the food Red Tree squirrels may stash for them self. Now, to get into serious information, their are things squirrels should not eat. These things are corn and peanuts (though a few peanuts every once in a while won’t hurt).

Where do Squirrels Live?

Squirrels essentially live in wooded areas. According to BBC squirrels live on every continent excluding Antarctica and Australia. Depending on the type of squirrel their location will vary. For example, a squirrel that lives primarily in India (the Indian Palm Squirrel) won’t live in America (such as the Eastern Grey Squirrel).

Where do Squirrels Sleep?

So those are the three main places a squirrel may sleep: on the side of a tree, a den underground, or under a pile of leaves. Each squirrel will have it’s own preference as to which they prefer and why. With that in mind let’s look into if they hibernate below.

There has been no definite answer to whether squirrels hibernate or not. It is confirmed that during winter squirrels will go into their den and stay there with all the food they have stashed in hopes to wait until winter finishes and to stay warm as the weather is cold. They do also sleep a lot during this time period but not throughout all of winter so that is why it is said they technically don’t hibernate.