A Summary of What Eats Rabbits and What Rabbits Eat

Similar to the squirrel, the rabbit has many predators. What eats rabbits are almost the same as many vultures previously mentioned in other articles. From flying to hissing and predators of 2 or more legs are everything rabbits should watch out for. 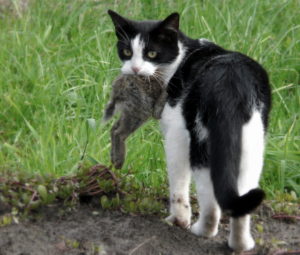 Falcons, kestrels, owls, sparrows, and hawks are a number of the flying rabbit vultures. These larger than usual birds enjoy feasting on baby rabbits (though they’ll eat adults as well). Aside from all avian predators, there are those that slither and hiss around. Typically, there are two usual types of serpents that eats rabbits. Poisonous snakes and contracting snakes are feared by rabbits (and who can blame them, right?).

Does Anything Else Eat Rabbits?

Plenty of things actually. Dog and Cat like predators eat rabbits as well. From coyotes to bobcats and cougars, the variety of predators rabbits have is massive. Thankfully for the rabbit race they reproduce quickly even though sadly not many of them will survive. That being said, these rabbits play a huge role in the food-web and are prey to many others.

Last but not least, humans are predators of rabbits as well. Most, or at least not many, humans will  not eat rabbits when they kill them. Either with our industrial plans (such as cars, buildings, etc.), or for fun. Rabbits, in the hunting world, are called “small-game” and are aimed at for practice or entertainment. Rabbits need to eat, and they eat vegetation and other forms of greens. As farmers grow their crops they may see how rabbits affected them. Because of that, farmers also kill rabbits to protect their crops.

As you may already know, rabbits are huge consumers of hay and grass. If you own a rabbit or intend to, this is a #1 thing to have. A rabbit as a pet will be accustomed to different meals and food choices than a wild rabbit so I will generally list what rabbits eat and below I will narrow it down to just wild rabbits. To continue, rabbits also should be eating a lot of fruits and vegetables. It’s essential to know that even a pet rabbit should have a very, very similar to diet to a rabbit of the wild.

In regards to fruits, to be on the safe side steer clear from feeding them any of the pits or seeds. On top of that, do not feed them tomato leaves and you’ve already eliminated so many potential concerns when it comes to feeding a rabbit fruit. You should also limit their fruit servings by a lot. Keep it at a bare minimum and try to avoid it if possible (2 tablespoons a day at most though).

In conclusion, rabbits eat fruits, vegetables, grass, and hay (for the most part). Their are some restrictions when it comes to fruits and vegetables so do not feed them anything you don’t believe they should eat in the first place. Alongside that, always double check to confirm if you’re ever doubtful.

What do Wild Rabbits Eat?

If you’re read the section above then the majority of this information may be repetitive. The reason for that is that a pet rabbit should have the same diet if not really similar to the diet of a wild rabbit. However, in the wild a rabbit doesn’t have an owner or care-taker to stop them from eating something they should not consume.

A wild rabbit will eat a lot of grass and hay if they can get it. However they also do have an interest in sweet things so it’s not uncommon to find them eating berries or other fruits they may have run into even though they should move on to vegetables instead. Wild rabbits will also (as it’s in their best interest) eat clovers, weeds, and other natural growing products from the ground.