What Eats Jellyfish and What They Eat in Return 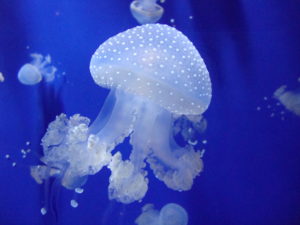 Though jellyfish are biologically 95 percent water they are still looked at as a meal by other sea-life. What eats jellyfish vary on the species of jellyfish. All of the jellyfish predators are part of the marine-life/marine food-web. It may come to a surprise that one of the main animals that eats jellyfish is other jellyfish. There are many different species and among all of them, the jellyfish can and is, it’s own predator and prey.

What Else Eats Jellyfish?

Aside from the cannibalistic jellyfish, more of the marine-life will also look forward to including them into their diet. A few other animals that eat jellyfish are tunas, sharks, some species of salmon, and even swordfish! That’s not all though. There’s quite a few more species that eat jellyfish – the list can go on for a while.

Two other main predators are: sunfish/mola, and sea turtles. The leatherback sea turtle is the main type of sea-turtle that will consume jellyfish. As opposed to other sea turtles, the leatherback’s teeth are not designed to consume hard shells which is why it relies on their gushy, gooey, body.

The ocean sunfish are capable of eating jellyfish because their digestive lining prevents it from being stung by the tentacles which may cause a threat. The bearded goby, another species of fish, also will eat a jellyfish or two. The bearded goby has prevented jellyfish from overrunning the seas. That’s how you know that these bearded goby’s are hungry!

Finally, to conclude, the list of jellyfish predators is long; nonetheless, two more main threats are the butterfish, and dogfish.

What do Jellyfish Eat?

With all this talk about what eats jellyfish, what do jellyfishes eat? A large amount of a jellyfishes diet consist of something very small, the plankton. They prey on plankton’s for the majority of their meals and other jellyfish for the rest (not including a few other appetizers they may enjoy). Depending on the type of jellyfish it is, some may be confined to eating plankton and fish eggs as others may eat a whole fish.

Basically a jellyfish will eat what swims, or floats, by it. Jellyfish are carnivores and so because of that they tend to not eat coral, kelp, or the likes. Aside from what was already mentioned, they will also eat shrimp, sea snails, or crabs. And there are also some jellyfish, the larger ones, who may completely devour smaller fish. Essentially, if it’s living in the ocean and is part of a carnivorous diet a jellyfish can eat it as long as it’s relative to the size and diet of each individual jellyfish.

It’s also good to know how jellyfish eat what they eat. After all, it seems like they have no mouth! Well they get smart when it comes to this. First, they usually sting their prey with their tentacles to kill the unfortunate creature. Then, they feed their meal up into a small hole that is located at the bottom of their jello-like body.

What do Pet Jellyfish Eat?

First visit a local pet shop that will sell the jellyfish and ensure you have their aquarium rightfully picked along with any needed materials. After that, let’s dive into their food. As you may have read above, some of the things a jellyfish eats won’t be convenient for you to acquire and feed them with. For example, it’d be rather expensive and takes a lot of effort to get them small fish, fish eggs, or crabs every time. The easiest and most nutritional thing you should feed a pet jellyfish is small brine shrimp. This will help maintaining a jellyfish be less expensive, is easy to get, and provides all the nutritional requirements needed by a jellyfish.

What do Baby Jellyfish Eat?

Where Do Jellyfish Live?

The easy answer to this is: every ocean. Some jellyfish live in a warm ocean as others may reside in the colder, arctic oceans. When it comes down to where jellyfish live it need’s to be specified to a more specific type. Overall, however, they live almost everywhere. To add on to that, they also live in different levels of the ocean. Some may be near the top as others will live their life in the deep-sea.

Jellyfish also will live in aquariums when obtained as a pet or in a museum/water showcase and what not. They can live in many different waters which is convenient for them.